If you're a programmer who has read a Head first's Java series, I'm sure you don't need an introduction to Kathy sierra. She has created javaranch and the author of few other hugely popular Head first book from O'Reilly. I remember reading Head First was so refreshing and fun filled. Thought it was a technical book, it never overwhelmed me with all-the-references. When I saw the trailer for Badass: Making Users Awesome book, I was sold. To the best of my knowledge, this is the first time I'm seeing a trailer for a book.

This book is highly relevant in today's world of digital marketing where Ads are squeezed on to every app, page. Now, I understand how to make an awesome user of a product than just making an awesome product. 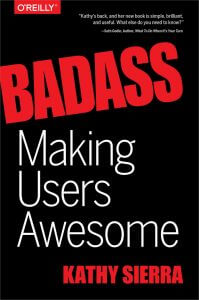 Because on their deathbed, our users won't be thinking,"If only I'd spent more time engaging with brands."

Midway into this book, I realized that I was plain wrong. Making too many decisions, drains mental energy available for the day. Kathy explains why it is important to have defaults.

We all think that choice is awesome we give the user lots and lots of choices.But we know, this is not actually what they feel. When were confronted by choices. This is what they feel. When they have choices. Because even after they make the choices, it’s still stressful, their still leaking resources. So it doesn’t mean, don’t give them choices, but you don’t force them to make those choices. So if they have trusted filters and defaults, it’s a huge benefit, and we also have micro leaks. Micro leaks are just the tiny little things that add up that you worry about right? I did turn off the oven; I did switch my phone on airplane mode right? It’s not going to actually buzz while I’m in the theatre right? So, death by 1,000 cognitive micro leaks.

I was surprised to know that I as a creator of an app can make my user fat.

If your UX asks the user to make choices, for example, even if those choices are both clear and useful, the act of deciding is a cognitive drain. And not just while they're deciding... even after we choose, an unconscious cognitive background thread is slowly consuming/leaking resources, "Was that the right choice?"

This explains my usage of Evernote. Though, I don't want to put my data into any of the freemium apps I kept using Evernote. Attempt to ditch it, wasn't successful. Without Evernote, I will be overwhelmed with information which I simply can't handle. I edit at least 5-10 notes every day on mobile and web. I think this may be one of the reasons why people who don't want the system to get into their way of work use Mac.

Key things I learnt from this book were deliberate practice and cognitive leaks. I could see this being stressed on all her talks.

To make users advance from beginner to expert, it takes
1. Better practice with feedback.
2. Developing an appetite for deep perceptual knowledge and skills through high-quantity and high quality.
3. Dealing with cognitive resource leaks.

I'd perceived practice as long, hard session of doing the repeated task. No matter even if I'm bored, I did things for the sake of doing to better at it. Repeated task breed mediocrity and boredom. It makes things permanent and locks in whatever is practiced. I started to do things without consciously involving on it. Kathy has dealt that behavior in detail on why it is important to move tasks from half assed skill to half a skill.

Researchers (Bloom (1985), Bryan & Harter (1899), Hayes (1989), Simmon & Chase (1973)) have shown it takes about ten years to develop expertise in any of a wide variety of areas, including chess playing, music composition, telegraph operation, painting, piano playing, swimming, tennis, and research in neuropsychology and topology. The key is deliberative practice: not just doing it again and again, but challenging yourself with a task that is just beyond your current ability, trying it, analyzing your performance while and after doing it, and correcting any mistakes. Then repeat. And repeat again. There appear to be no real shortcuts: even Mozart, who was a musical prodigy at age 4, took 13 more years before he began to produce world-class music. In another genre, the Beatles seemed to burst onto the scene with a string of #1 hits and an appearance on the Ed Sullivan show in 1964. But they had been playing small clubs in Liverpool and Hamburg since 1957, and while they had mass appeal early on, their first great critical success, Sgt. Peppers, was released in 1967. Malcolm Gladwell has popularized the idea, although he concentrates on 10,000 hours rather than 10 years.

We should constantly examine our Mastered bucket, and start looking for a scope to better. If I see in retrospective, I was doing the same things over and over again,yet expecting different results. I've already started working on it. A week ago, I too have made a switch to Webstorm as she confesses :)

In order to be an expert we need to take a different approach by watching/listening or being surrounded by experts. It is demonstrated through chicken sexing, perceptual learning in flight training anecdotes. Our brains recognizes a pattern on being exposed to such magnitude of high quality content. As a non native english speakers, I was made to read english daily to build my vocabulary. Up until now, I didn't know of science behind it. I thought just being bombarded every day with English word could help me, but now I understand that there is more to it.

If you're creator interacting with people with everyday and has ability to impact their life, I highly recommend you to watch this 20 minute talk to understand cognitive leak. It certainly isn't empathy. To me, it resembles brevity, sleek, and objectivism.

I, as a developer after reading this book have made a commitment to never plague my app with options, pre-configure defaults wherever possible and never drain precious cognitive resource of my users.