Life without principle written in 1863, is a philosophical essay by Thoreau in which he criticizes how people chose to spend their lives. Though it may seem dated, I find Thoreau's views on Life, Labor and Livelihood interesting and thought provoking. The Book was full of quotable quotes 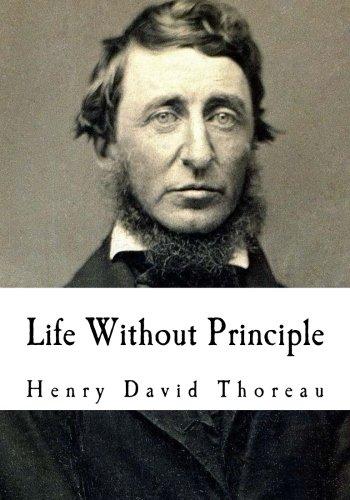 This world is a place of business. .. There is no sabbath. It would be glorious to see mankind at leisure for once. It is nothing but work, work, work. There is a coarse and boisterous moneymaking fellow in the outskirts of our town, who is going to build a bank wall... and he wishes me to spend three weeks there digging with him. The result will be that he will perhaps get some more money to hoard, and leave for his heirs to spend foolishly. If I do this, most will commend me as an industrious and hardworking man; but if I choose to devote myself to certain labors which yield more real profit, though but little money, they may be inclined to look on me as an idler. Nevertheless, as I do not need the police of meaningless labor to regulate me..

One word for it. Enterprise.

Men during his time were busy spending their limited time on getting a living than actually living. If someone chooses to do a labor outside established societal norms to get his livelihood, he was in danger of being called an idler. Because, society simply couldn't understand why someone could labor for a little money.

Another problem, he observed was, men were busy drowning themselves in trivial things, such as reading newspaper. Instead, he wanted them to focus on things that matters to them.

Just so hollow and ineffectual, for the most part, is our ordinary conversation. Surface meets surface.. We rarely meet a man who can tell us any news which he has not read in a newspaper, or been told by his neighbor; and, for the most part, the only difference between us and our fellow is that he has seen the newspaper, or been out to tea, and we have not. In proportion as our inward life fails, we go more constantly and desperately to the post-office. You may depend on it, that the poor fellow who walks away with the greatest number of letters, proud of his extensive correspondence, has not heard from himself this long while

For Thoreau, what mattered was the solitude to know himself. We can know that from Walden.

When our life ceases to be inward and private, conversation degenerates into mere gossip. I do not know but it is too much to read one newspaper a week. I have tried it recently, and for so long it seems to me that I have not dwelt in my native region. The sun, the clouds, the snow, the trees say not so much to me. You cannot serve two masters.

Stretching it a bit to suit today's context. I find Thoreau's days had newspapers, my dad's generation had televisions and my generation has it as social media.

It requires more than a day's devotion to know and to possess the wealth of a day.

They have far too many things in common. They inherently force you to catch up with the happenings around. They instill the fear of missing out. They are the modern day fire hose of overwhelming information. By being there all day, you can be a consumer, not the creator. By Thoreau standards, it's simply a hindrance to think and reason out the priorities in life.

Thoreau was of the strong opinion that everyone needs to be worthily employed. The honest labor, that will add value to the common stock, that men would love do with honest and sincerity, and strive to excel in it with each passing day. Such a labor could also be rewarding to pursue yielding more than tangibles such as a pay check.

The aim of the laborer should be, not to get his living, to get "a good job," but to perform well a certain work; and, even in a pecuniary sense. .. Do not hire a man who does your work for money, but him who does it for love of it.. Furthermore, don’t hire someone who’s only in it for the money.

.. All great enterprises are self-supporting. The poet, for instance, must sustain his body by his poetry, as a steam planing-mill feeds its boilers with the shavings it makes. You must get your living by loving.

He calls gold diggers of his days as the enemy of the honest labor and the greatest disgrace of the mankind. Because they aren't sustaining themselves by the wages of honest toil but at the cost of less fortunates. For the same reason, he deems living off an inheritance, charity to be shameful.

On the contrary, Thoreau being a land surveyor, was asked to do his job coarsely and not well enough, so that the sellers could make the most. He could not do his day job with the sincerity, he wished.

Remember that what is valuable about a thing is not the same as how much money it will fetch on the market.

Another business he had was lecturing. He would travel around the country critiquing the society on all his lectures. Even if the society then, won't value it well enough. He being an outlier, won't care much of others opinion, continued to do it. Because he thought it to be a meaningful labor of his life. The result is, this and many other lectures. I think it is this labor of Thoreau, that was valuable to him, keeps him relevant to us today.

What I think actually differentiates Thoreau from other philosophers is the way in which he connects both of life and labor.

There’s no shortage of gold, of tobacco, of alcohol, but there is a short supply of “a high and earnest purpose."

What truly matters in life? Is it the livelihood or the life itself.

If it's the life, why are we spending our precious-finite amount of time in getting a livelihood and why aren't we doing a meaningful work for earning.

So far I am successful. But I foresee that if my wants should be much increased, the labor required to supply them would become a drudgery. If I should sell both my forenoons and afternoons to society, as most appear to do, I am sure that for me there would be nothing left worth living for. I trust that I shall never thus sell my birthright for a mess of pottage.

Thoreau had lesser need for things. Even if the needs increase, he won't care to off-balance his stand to meet his needs.

Sustain yourself by the life you live, not by exchanging your life for money and living off that.

His ideas dint go mainstream then. But I still think, it's worth the effort to confront us with the question, that Thoreau asked, "Are you living off balance?". I am sure, irrespective of whatever answer you get for it, it will lead you to your core values and priorities in life.