The Fountainhead by Ayn Rand

I recently read The Fountainhead. It is a fictional work depicting the battles waged by Howard roak, an individual against the society. The choice to think for oneself, or to live second hand by depending upon the minds of others.

"Man's ego is the fountainhead of human progress" 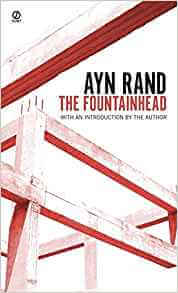 I'm sharing few quotes which I loved from the book

“I love doing it. Every building is like a person. Single and unrepeatable.” “A house can have integrity, just like a person,' said Roark, 'and just as seldom.” “Now take a human body. Why wouldn't you like to see a human body with a curling tail with a crest of ostrich feathers at the end? And with ears shaped like acanthus leaves? It would be ornamental, you know, instead of the stark, bare ugliness we have now. Well, why don't you like the idea? Because it would be useless and pointless. Because the beauty of the human body is that is hasn't a single muscle which doesn't serve its purpose; that there's not a line wasted; that every detail of it fits one idea, the idea of a man and the life of a man.”

“Rules?" said Roark. "Here are my rules: what can be done with one substance must never be done with another. No two materials are alike. No two sites on earth are alike. No two buildings have the same purpose. The purpose, the site, the material determine the shape. Nothing can be reasonable or beautiful unless it's made by one central idea, and the idea sets every detail. A building is alive, like a man. Its integrity is to follow its own truth, its one single theme, and to serve its own single purpose. A man doesn't borrow pieces of his body. A building doesn't borrow hunks of its soul. Its maker gives it the soul and every wall, window and stairway to express it.”

I liked the way how Ayn Rand defined integrity

“Do you think integrity is the monopoly of the artist? And what, incidentally, do you think integrity is? The ability not to pick a watch out of your neighbor's pocket? No, it's not as easy as that. If that were all, I'd say ninety-five percent of humanity were honest, upright men. Only, as you can see, they aren't. Integrity is the ability to stand by an idea. That presupposes the ability to think. Thinking is something one doesn't borrow or pawn.”
“To sell your soul is the easiest thing in the world. That's what everybody does every hour of his life. If I asked you to keep your soul - would you understand why that's much harder?”

“Listen to what is being preached today. Look at everyone around us. You've wondered why they suffer, why they seek happiness and never find it. If any man stopped and asked himself whether he's ever held a truly personal desire, he'd find the answer. He'd see that all his wishes, his efforts, his dreams, his ambitions are motivated by other men. He's not really struggling even for material wealth, but for the second-hander's delusion - prestige. A stamp of approval, not his own. He can find no joy in the struggle and no joy when he has succeeded. He can't say about a single thing: 'This is what I wanted because I wanted it, not because it made my neighbors gape at me'. Then he wonders why he's unhappy.”

“It's easy to run to others. It's so hard to stand on one's own record. You can fake virtue for an audience. You can't fake it in your own eyes. Your ego is your strictest judge. They run from it. They spend their lives running. It's easier to donate a few thousand to charity and think oneself noble than to base self-respect on personal standards of personal achievement. It's simple to seek substitutes for competence--such easy substitutes: love, charm, kindness, charity. But there is no substitute for competence.”

“Before you can do things for people, you must be the kind of man who can get things done. But to get things done, you must love the doing, not the secondary consequences. The work, not the people. Your own action, not any possible object of your charity.”