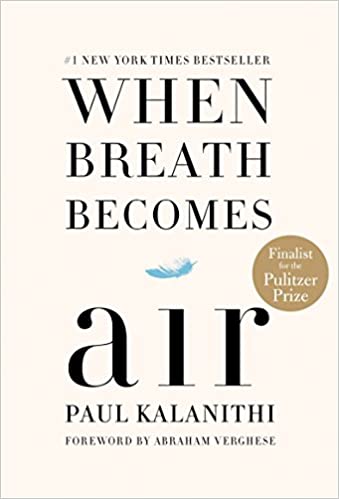 These are just a few of the questions Paul Kalanithi, a 36-year-old neurosurgeon had to face after being diagnosed with Stage IV Lung cancer.

Death isn't something new to Paul. As a resident neurosurgeon, he has been trained to handle it every day. His job was not merely to save lives, but to be a guide to the patient and their family. A guide who can help them to decide between the treatments and their tradeoffs. Tradeoff such as the ability to talk or a few extra months of mute life, a clear vision, or the fatal brain hemorrhage riddance? Neurologic suffering that the child has to endure their entire life or letting the life end. It is through this process that, paul encounters the question about life, death, and the meaning in the medical context. Generally, such questions would lead up to no answer since life and death are mere philosophical abstracts. But in the medical context, the question is not simply whether to live or die but what kind of life is worth living. Needless to say that the families suffered the most than the patient themselves, couping with the new reality. But after being diagnosed with Stage IV Lung cancer, this is going his first and the only time as a patient to answer the question for himself.

99% of people select their job based on the pay, the work environment, and the hours. but that's the point. Putting lifestyle first is how you find a job - not a calling. But for Paul, neurosurgery is his calling. He was drawn by the excellence it demanded. The difference between life, death, and worse could be a matter of millimeters. When so much rests on your skills to save lives, being extremely competent becomes a moral requirement. He toiled hard, learning medicine, working 100+ hour works weeks, operating 36+ hour surgery. He has been building potential all through his time at residency, but now that potential would now go unrealized. After being diagnosed, he began re-evaluating his goals and aspirations in life. If he had 10 years, he would return to treating disease. If he had a year, he would write a book. If he had only three months, he would rather spend the time with the family.

Though death may be a one-time event, living with a terminal illness is a journey whose only mission is to maximize the quality of remaining time. Paul and his wife discuss the idea of having a child. They both know that he’s going to die and that it will a distraction from their time together, but they understand that life isn’t about avoiding pain and suffering. That additional suffering may also be accompanied by extreme joy.

They had the child.

Yet one thing cannot be robbed of her futurity: my daughter, Cady. I hope I’ll live long enough that she has some memory of me. Words have a longevity I do not. I had thought I could leave her a series of letters — but what would they really say? I don’t know what this girl will be like when she is 15; I don’t even know if she’ll take to the nickname we’ve given her. There is perhaps only one thing to say to this infant, who is all future, overlapping briefly with me, whose life, barring the improbable, is all but past.

That message is simple:

When you come to one of the many moments in life when you must give an account of yourself, provide a ledger of what you have been, and done, and meant to the world, do not, I pray, discount that you filled a dying man’s days with a sated joy, a joy unknown to me in all my prior years, a joy that does not hunger for more and more, but rests, satisfied. In this time, right now, that is an enormous thing.

This book and his daughter, Cady are the legacy that Paul has left for us.

He faced each stage of his illness with grace -, not bravado or misguided faith that he would "overcome" or "beat" cancer with authenticity that allowed him to grieve the loss of the future he has planned and forge a new one. He cried on the day he was diagnosed, he cried on his last day in the operating room. He left himself to be open and vulnerable. Let himself be comforted. Being fully alive, full of hope not for an unlikely cure but for the days that were full of purpose and meaning. This is the life he was given, this is what he made of it.